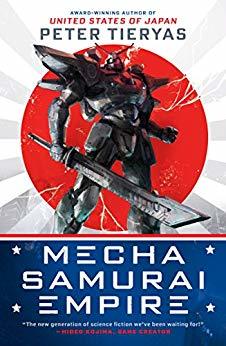 For a genre that’s usually associated with Japanese anime and manga, I haven’t seen many “mecha” novels (or movies, for that matter, with Pacific Rim (2013) being the only notable example). Consequently, when I received an advance reader copy of Mecha Samurai Empire, I was looking forward to reading it. While there were still a few grammatical and proofreading errors in this book—of which I’m sure have been fixed in the final version—portions of the plot didn’t sit well with me. My main qualm is the main character who really isn’t good at anything but still gets to pilot a huge and complicated piece of machinery just because he wants to.

A clear and obvious mix between The Man in the High Castle and Neon Genesis Evangelion, the few strong elements of this book were in the mecha battles themselves. The problem is that the references sprinkled throughout are so obvious (I had to roll my eyes at the Mega Man 2 reference) as to distract from the story. I don’t mind if other stories influence writers, but at least make their influence less obvious when crafting something “new.” At its worst, Mecha Samurai Empire holds to all the tropes and clichés present in mecha anime and manga. If you’re into that kind of thing, this probably isn’t a problem.

While I still enjoy the spectacle of giant robots fighting, a good story needs to come down to its characters. Since I didn’t particularly like the main character, I tried to grab onto some of the minor ones. Unfortunately, while some of the character arcs were highly predictable, most of the minor characters didn’t stand out either (and the one that did was super annoying). Just like Pacific Rim: Uprising (2018) made me lose faith that we’ll see live-action adaptations of mecha anime like Evangelion or Gurren Lagann, Mecha Samurai Empire shows we still have a way to go before novels of this genre are prevalent.

An obvious mashup with pretty good action, I give Mecha Samurai Empire 3.0 stars out of 5.