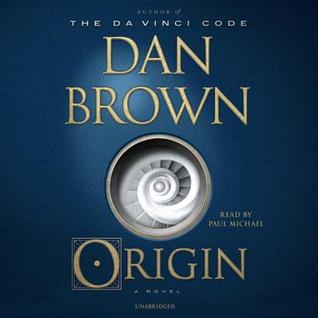 When it comes to Dan Brown’s Robert Langdon series of books, I have appreciated his ability to mold art and symbology into a tight and thrilling narrative. His works have not been without controversy, the main perpetrator, of course, being The Da Vinci Code. In Origin, Brown leaves the world of classical art for the modern pieces that are still filled with meaning and symbology, just not in ways that lend themselves to uncovering ancient mysteries. While there is plenty of interesting plot points and twists along the way, Origin seems set to stir the pot of controversy more than tell an interesting story.

It’s been quite some time since the last Robert Langdon book released, so this book needed to advance its technology to be able to keep up with the modern times. If anything, I felt the inclusion of artificial intelligence down-played why Langdon was even involved at all, since he was mostly the “answer man” who knew the information to advance the plot. Sure, Langdon still needed to be there to interact physically with the surroundings, but all he was tasked with finding was a password to a computer, and that was it. Even some of the headier symbology that he’d usually bring to the table was reduced to basic, common knowledge tidbits.

Perhaps the overall story was weak to begin with, because I found the narrative in Origin to be distracted at best. The focus jumped around a lot, which I recognize has happened in previous books in the series, but it was almost like three different stories were being told here, and very rarely did they intersect with each other. Even the eponymous “origin” wasn’t that great of a reveal, merely acting as a McGuffin to drive the conflict.

Hardly one of the best of the Robert Langdon series, I give Origin 3.0 stars out of 5.