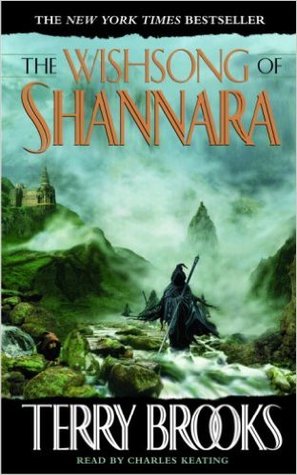 One thing that was made clear to me when I read The Elfstones of Shannara was that this trilogy (that started with The Sword of Shannara) didn’t follow the same characters from book to book, per se. Sure, there were characters like Allanon the Druid who managed to span all three volumes, but overall I didn’t find that I needed to have read the previous book in the trilogy to understand what was going on in the story. This was quite beneficial when I started reading The Wishsong of Shannara, as it quickly grew to be my favorite in the series so far.

While I had high hopes for the “main quest” of this book, the fact that it’s put into side-story status almost from the beginning was a little frustrating. Don’t make me follow the journey of the character who needs to grow the most! Show me the thrilling adventures of a magical girl and her Highlander and druid escorts. Regardless, I did find Jair’s journey to be a bit more interesting once it was clear that’s who we were following through the majority of the book. Sure, we touched back with Brin occasionally, and her adventures were neat, too—just not nearly as interesting as Jair’s ended up being.

I have previously complained that The Sword of Shannara seemed like a bit of a Lord of the Rings knockoff. Additionally, The Wishsong of Shannara does have some similarities to The Two Towers. Not necessarily being tied to an overarching story arc did help to make this book quite interesting in terms of what minor characters could be developed to advance the story. This is on top of the excellent growth of both Ohmsfords as they learn the true power of the magic that lies within them. If you’re interested in any of the original Shannara books, I’d suggest you give this one a read first.

A relatively original high fantasy, and my favorite of the Shannara trilogy, I give The Wishsong of Shannara 4.5 stars out of 5.