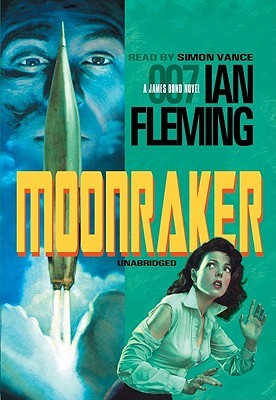 For those of you who have seen the movie Moonraker (1979), push everything you know about this story out of your head. About the only things that the film has in common with the book are the main character, villain, and an enormous rocket. While the film tried to capitalize on the sci-fi that was popular at the time, the original book takes a look at the threat introduced in World War II by the Germans: ballistic missiles. For its time, the book was relevant in a world that hadn’t even been to space yet.

Having now read a handful of the James Bond books, my problem with this book stems from how formulaic it was. Only three books in, and it felt like Fleming was recycling content and would continue to for books to come (like in Goldfinger). I mean, never before has a game of bridge been so exciting, but using card games as exposition to introduce the villain already seems done to death at this point. From here, it’s just a hop, skip, and a jump through the sexual tension with a female counterpart, the villain’s monologue, and the eventual foiling of plans by Bond.

While I did appreciate the slight twist in the ending with Gala Brand, it seemed slightly out of character based on how she acted previously in the story. Perhaps this was because the narrator is practically half-inside Bond’s head, but it still felt a little misleading. While the conclusion of the villain’s plot was exciting, the comic nature of the comeuppance almost had an eye-rolling chuckle tied to it as well. In the end, Moonraker is a James Bond story, so it delivers on all the tropes and clichés of the series. If you like the series, you’re unlikely to be disappointed.

The standard Bond formula in yet another book, I give Moonraker 3.0 stars out of 5.