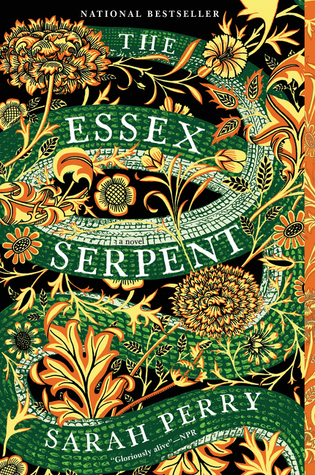 It’s been a while since I’ve read a book as profound as The Essex Serpent. Perhaps it’s because they don’t write books like this anymore. While written in the last few years, the style of The Essex Serpent is distinctly Victorian. It holds callbacks to the greats of gothic literature, including the physiological studies of Frankenstein and the back-and-forth letter writing of Dracula. All the while, the ever-present gloom of the muddy and foggy Essex shoreline hides the eponymous serpent just outside the reader’s view, providing anticipation of its reveal. Is the Essex Serpent real or is it a figment of so much imagination?

Of course, in staying with the Victorian style, the book does suffer somewhat in readability. The vocabulary and description are certainly more voluminous than modern volumes, but my biggest qualm seems to be more along the lines of the seemingly endless talk that occurs in the first half of the book—perhaps trying to mimic one of Jane Austen’s romances—that only seems to be present for character exposition. There are also a few sub-plots that sound incredibly important, but don’t end up having much sway on the outcome of the plot.

Still, despite having to get used to the style, the characters and their drama is expertly crafted. In particular, the “friendship” between the widow Cora and the married clergyman Will was positively heart-pounding. Cora’s son was delightfully peculiar, as was Will’s wife. If The Essex Serpent was more predictable, I’m sure the ending would have been different. I’ll have to settle for the conclusion as written, instead of having to read a more serious version of Sense and Sensibility and Sea Monsters. At least, the plot surrounding the Essex Serpent is exciting and was what kept me reading through the muddy first half.

A modern book expertly written in the Victorian style, I give The Essex Serpent 4.0 stars out of 5.