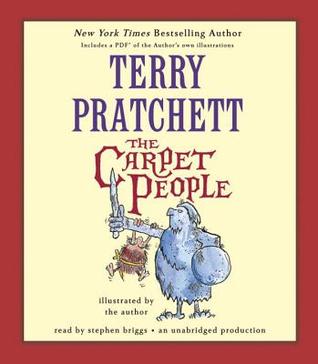 Having now read one of Terry Pratchett’s books, I thought it might be interesting to go back and read his very first work. Many authors don’t manage to become famous with their very first book, and I think Terry Pratchett is no exception here. The Carpet People is an amusing book with his standard British charm, but I think it never goes far enough in its exploration of the idea. After all, I was expecting this book to be more along the lines of The Borrowers instead of just a straight-up fantasy with a few references to the fact that these creatures lived in the carpet.

Part of the problem I seemed to have with this book was the incessant need for fantasy books to create new names for objects and creatures that already (mostly) exist. If you took away the carpet setting, I think this book could be practically indistinguishable from any other fantasy book. This is what disappointed me the most. I believe there are plenty of potential moments to highlight the size disparity between creatures that live in the carpet, and the rest of the world we’re familiar with (a la Honey, I Shrunk the Kids (1989)).

Granted, I will give this book some grace considering that Terry Pratchett originally wrote it when he was a teenager. For this reason alone, I do have to say that it should be an inspiration for young writers, just to show that it can be done. Pratchett clearly improved his writing skills over time to become a bestselling author, but it’s important to recognize and realize that he didn’t start out that way. Ironically enough, though, I almost preferred the serialized version of this story that he originally wrote over the more “standard” version that aligns with his later styles.

An amusing book and impressive first novel for a teenage Terry Pratchett, I give The Carpet People 3.0 stars out of 5.