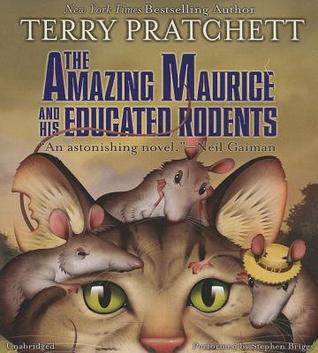 For many years, I have heard of Terry Pratchett, but have never read any of his work. This came to light in 2015, when Pratchett died, and many fans of his work came forward to express their condolences. At that point, I hadn’t considered reading any of his work, but the outpouring of love for the recently deceased author made me reconsider. Consequently, I added some Pratchett books to my “to read” list and eventually chose The Amazing Maurice and His Educated Rodents for my first foray into the written world of Terry Pratchett. I certainly picked well, as it won the Carnegie Medal in the year it was written.

I was a little worried that I would be lost coming into the Discworld series at anywhere other than the beginning, but since this book was written for children, it made it simple to ease into the universe Pratchett created. What I found most amusing about The Amazing Maurice and His Educated Rodents was how self-aware and tongue-in-cheek it was. Talking animals are by no means a new concept in children’s literature, but Pratchett managed to show how ridiculous this idea was in the real world while also providing a somewhat solid explanation for how it happened.

The one aspect of this book that stood out the most was how British its humor was. I almost felt like I was listening to a Monty Python skit or an Aardman Animation movie as I worked my way through this audiobook. For those who appreciate British humor (or, I guess humour, as they spell it over there), I would highly recommend this book, as it’s certainly witty and made me chuckle on quite a few occasions. This humor overcomes the fact that the plot is a little confusing to follow in places as it jumps between different characters, but overall it’s a solid story.

An instant children’s classic with loads of British humour, I give The Amazing Maurice and His Educated Rodents 4.0 stars out of 5.