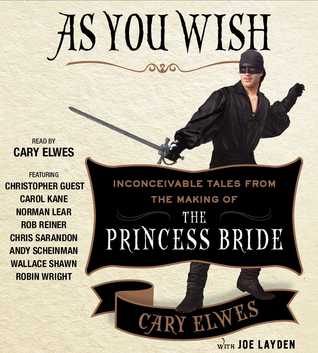 As You Wish – Inconceivable Tales from the Making of The Princess Bride
Year: 2014
Author: Cary Elwes
Length: 421 minutes / 7.02 hours

While I love audiobooks for their capacity to let me mindlessly absorb books while I’m driving to or from work, much of the story comes down to the narrator and their inflections. Sometimes these narrators can be annoying, or incomprehensible, or vary their volume too much. It is a rare treat to find an audiobook that fully capitalizes on the medium, either by adding music and sound effects or (in this case) using the voices of actual people to narrate the story. As You Wish is just such an audiobook, and I would even go so far to say it is the superior version of this book, even without “reading” it for myself.

As one of the most frequent and common of quotable movies, The Princess Bride (1987) is an odd little film that just works. It’s fantasy, it’s comedy, it’s family-friendly. It’s all these things and more. But what about the people who made it happen? There have been horror stories of narcissistic directors or difficult actors making successful films, even despite their personalities. Fortunately, this most beloved of classics was not like that at all. All the behind-the-scenes stories helped to add an understanding and depth to The Princess Bride that should appeal to both diehard fans and those unfamiliar with the film.

Cary Elwes does a fantastic job of stringing these stories together while also exploring the backgrounds of all the characters (and the actors who played them). While the other actors do get their say in this audiobook, it’s Elwes’ impersonations of many of the individuals that was hilariously on point. He takes a humble and even-handed approach to storytelling that brings the listener into the midst of the filmmaking process without letting his personality get in the way of recounting historical events. Whether you’re a fan of the movie or a fan of audiobooks, his book is absolutely worth a listen.

A superb audiobook that everyone should listen to, I give As You Wish 5.0 stars out of 5.