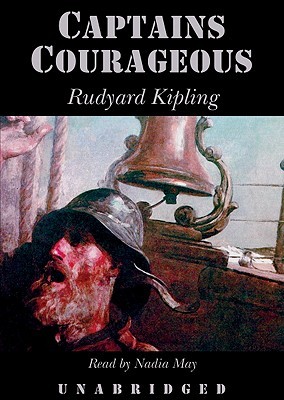 Captains Courageous is one of those classics that I just haven’t read, for whatever reason. I got the sense it was about being at sea, probably in the same vein as Moby Dick or Treasure Island. And yet, I don’t know if I could tell you what happened in this book. Sure, the main character was picked up by a fishing vessel, and eventually, they learned how to deal with the harsh job of being a fisherman, but that’s pretty much it. The series of fishing adventures seem to be loosely tied together, and the overarching plot was weak at best.

Part of me wonders if the audiobook version of this classic was to blame. Not only did the narrator have a bit of an accent, but she did all the different dialects of the various characters based on their ethnic origins. While I would usually love this attention to detail, more than half the time, I could hardly understand what was being said. Furthermore, the amount of sailing/fishing jargon this book had completely lost me at times, as I have no experience or knowledge of this profession to understand what the characters are talking about.

The two aspects I did enjoy as part of this audiobook were the songs and the length. While I likely would have just read the lyrics of these sea shanties in the book with no understanding of how the tune would go, the narrator sang these songs, thus allowing me to appreciate them more than just the words would have provided. Secondly, while I didn’t understand what was going on for most of the time I was listening to this audiobook, it was still a short book. Therefore, I didn’t waste too much time listening to this book and could move on to different books that much quicker.

A classic that probably hasn’t aged well with time, I give Captains Courageous 2.5 stars out of 5.