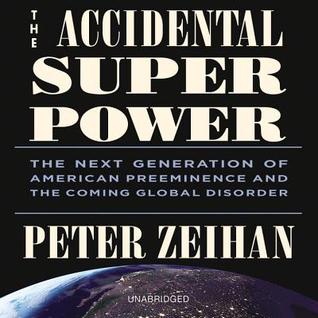 I can’t remember when or why I added this book to my “to-read” list on Overdrive, but I’m certainly glad I did. While it’s a little dated from a 2017 perspective, The Accidental Superpower is an incredibly insightful book that helps to peel back the onion of global politics and economics to reveal the underlying factors that are, and have been, shaping the world into what it is today. As a bonus, after reading this book, I have a better understanding of how countries and societies develop from a geographical and economic standpoint and can use these insights to aid in the world-building for a few of my upcoming novel series.

Right from the get-go, The Accidental Superpower opened my eyes to the obvious: geography determines economy. Mountains separate areas almost as well as oceans do, but the best economies are the ones that can move their goods about in the fastest and most efficient ways. As luck would have it when first colonizing the United States, the founding fathers had no idea just how immensely fortunate they would be with the geography to their west. Peter Zeihan expertly shows how other countries have geographic problems that are keeping them from being nearly as united as the United States.

However, disaster is soon upon us. The demographic changes throughout the world will soon impose strains on all economic systems. While the world will continue to be in crisis due to its geographies influencing the economies of its various nation states, the United States is the only one holding it all together, mostly due to our generosity of offering “free trade” after the end of World War II. If we pull that rug out from underneath the world, we in the U.S. will likely survive, but at the cost of the global economy collapsing.

A must-read for anyone who exists in this global economy, I give The Accidental Superpower 4.5 stars out of 5.