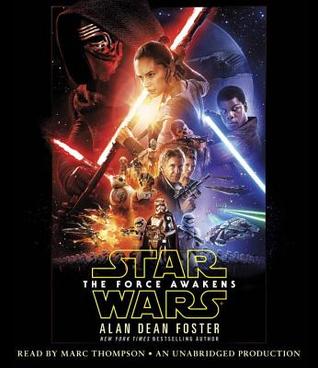 If you’ve been following along recently, you’ll know that I’ve been on a bit of a “movie” kick when it comes to the audiobooks I’ve listened to. While there are plenty of movies based on books, I haven’t really been one to read novelizations of movies. That being said, I’ve found the writing style in my own novels to be a bit of a novelization of the ideas in my mind, since I usually try and describe scenes in a cinematic way. At any rate, I was expecting a story that held close to the film, and this book certainly delivered on that promise.

I’ll admit that the more I think about the plot and characters of The Force Awakens, the more I find that it almost exactly matches the events of A New Hope. However, there were some weaknesses in the first installment of the Star Wars franchise that I feel are addressed in this recent installment. Sure, all the elements are there, but they’ve been mixed around into different characters, settings, and conflicts that add a bit more depth to the story than the archetypical one presented in A New Hope. As a reboot, The Force Awakens does an excellent job of calling back to what made the original great, but doing so in a way that is still different enough to provide interesting twists and questions.

One thing I do like about this version of the story, compared to the movie, is the “deleted scenes” that help explain some of the plot holes from the film. Maybe these scenes hindered the flow of the movie (or weren’t important enough to include) but they certainly helped me understand the story a lot better now that I know about them. Finally, while I know that many films have “enhanced audio” for blind people, I’d almost recommend these people listen to this audiobook instead. The music, sound effects, and even many of the actors’ voices all are used at a pace that’s much slower in order to really grasp what’s happening with the story.

A fantastic audiobook that faithfully captures everything (and more) that made the film great, I give Star Wars: The Force Awakens 4.5 stars out of 5.