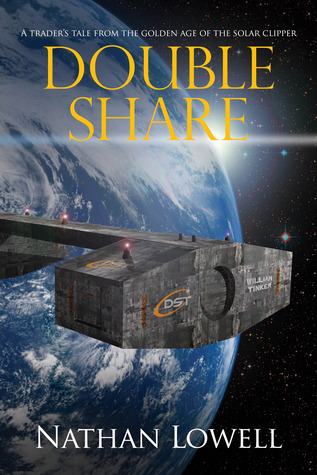 Much like Half Share overcompensated for Quarter Share’s naïveté, I found Double Share to take an extreme stance on the dynamic of a ship’s crew. This stance was practically diametrically opposed to the crew of Ishmael Wang’s first crew aboard the Lois McKendrick. While it might sound like I’m complaining about this, I’m actually lauding Nathan Lowell for finally creating a crew that’s a little more realistic than the idyllic one he used during the first three books in this series. Of course, it would have been nice to intersperse difficult characters throughout the books, instead of having to deal with them all at once, but it is what it is.

Even though the first three books in this series were fairly close together in timeframes, I would have liked a little more detail given to the handful of years dedicated to Wang’s time at the Academy, especially since the end of Full Share made it seem like the four characters headed to the Academy would certainly have some stories to tell. As it is, we definitely get to see Wang’s talent as a Third Mate on the William Tinker, since nobody on board seems to be lithe to “rock the boat,” so to speak. Clearly, his time in the Academy merely accentuated that life on the Lois McKendrick was the gold standard to shoot for.

Part of me has really enjoyed this series as we follow Ishmael’s journey from landlubber to experienced spacer since it somewhat parallels my own quick rise to my current position at work. His “trial by fire” in Double Share might have definitely broken any lesser man, but Wang showed he has what it takes to turn a ship around. His methods might be gradual, but they are certainly effective.

An extreme case of a deplorable crew, I give Double Share 4.5 stars out of 5.