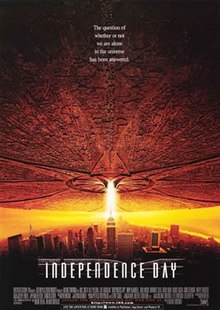 While most people just roll their eyes at the mention of Roland Emmerich as a director, many forget that he essentially started the revival of the “destructive action” film. What used to be common in the seventies, with movies like The Poseidon Adventure (1972) and Towering Inferno (1974), films showing catastrophes had taken a bit of a back seat until Independence Day. This revival on a globally-catastrophic scale brought about such films as Armageddon (1998) and Deep Impact (1998).

Granted, Emmerich continued to make world destruction a part of his directing career, which is why films like this almost seem hokey today. Godzilla (1998), The Day After Tomorrow (2004), 2012 (2009), and White House Down (2013) haven’t been the most critically-acclaimed films of all time, but they certainly carry Emmerich’s penchant for demolishing cultural landmarks. One does wonder why Independence Day stands out amongst his other films, almost as an anomaly. While later films by Roland Emmerich were a bit too over the top in their carnage, this film has a good balance of destruction and plot. Some of the comedy in later films felt forced, but in this film the actors did a great job of lightening tension. Perhaps the biggest difference between Independence Day and his later films is the fact that humanity can actually fight back against the annihilation it currently faces.

A great sci-fi film that almost guarantees it’ll be shown on TV at least once a year due to it’s loose holiday theme, I give Independence Day 4.5 stars out of 5.