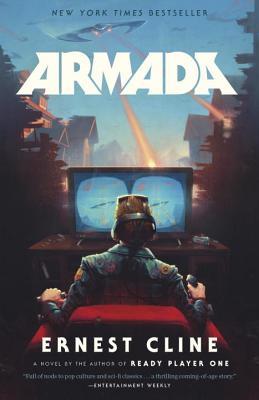 When I first heard about Ready Player One years ago, I was excited an author would even try to capture the spirit of the hardcore pop culture lover. After I received a hardcover copy of that book for Christmas, I devoured every word and loved every moment of it. This was why, when I saw Ernest Cline had written another book appearing to be in the same vein of Ready Player One, I had to buy it and give it a read. This book was Armada.

Unfortunately, I was not nearly as impressed with Armada as I was with Ready Player One. In Armada, the pop culture references were there, but almost to the point of oversaturation. There were plenty of references I didn’t understand because I haven’t encountered the source material, which was somewhat frustrating. Furthermore, what made the references entertaining and fun in Ready Player One was that they were tied to unravelling the mystery and linking each clue to the next one; in Armada, they were merely the mating call of the nerd.

And while Armada has a few scenes of immersive action that are incredibly well written, the plot is quite lacking. The first “reveal” (if you can call it that) was predictable and the motivations of the antagonists were weak at best, almost as if he had written himself into a corner and didn’t know how to resolve the story in a satisfying way. In fact, the huge numbers of pop culture references actually made the story seem less original, as it pretty much came across as Ender’s Game, and the narrator told you as much.

A story with a potential it never quite lived up to and a shadow of the author’s previous book it could never come out from underneath, I give Armada 3.0 stars out of 5.