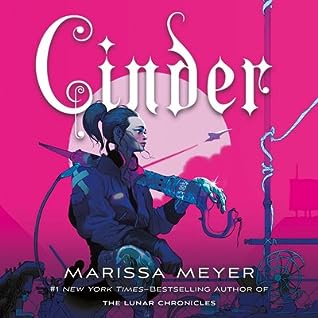 For years, I had heard of The Lunar Chronicles and thought people were referring to the two Sega Saturn video games, Lunar: Silver Star Story and Lunar 2: Eternal Blue. However, seeing as most people haven’t heard of these video games, I eventually figured out that they referred to the Young Adult series of books. While 2012 was definitely around the height of the re-imagined fairy tale craze, I do have to admit that this science-fiction take on these classic stories is a fresh new way of adapting the plots that we all grew up with through Disney movies.

The first book in the series, Cinder, takes Cinderella’s down-and-out heroine and updates her to a cyborg unaware of her royal origins. What made this story engaging was figuring out how the standard trappings of the Cinderella story would be adapted to this futuristic setting. Granted, this made some of the plot points more than obvious well before they happened, but I usually ended up smiling at the bits of homage that Cinder paid to its origins—such as a “pumpkin” of a car and the leaving behind of certain footwear.

While the plot was mostly predictable, I appreciated the awkward “teenager” dialogue of the titular protagonist but only to a point. I’ll admit that YA books have a kind of frenetic style that matches their main characters’ emotional turbulence, and Cinder certainly reads like a teenage girl replete with the insecurities, slang, and missed steps that a full-grown adult wouldn’t necessarily have as character quirks. The problem is that having to follow such a snarky young individual for so long through the story makes it eventually grate on my nerves, especially when the path she needs to take in her life is so obvious. Then again, perhaps I’m just a crotchety old man who isn’t in-tune with the youth anymore.

A great sci-fi Cinderella retelling, I give Cinder 4.0 stars out of 5.