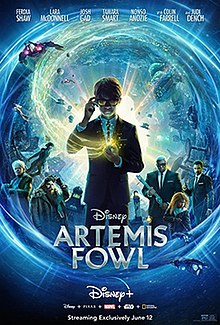 When I first saw the trailers for Artemis Fowl (2020), I was intrigued enough to pick up the book and read it. With its continual delays, I was able to also read through the first five books in the series. This may have helped me understand what Disney was trying to do with this, but it doesn’t excuse their butchering of the source material. I can only imagine how confused people who hadn’t read a single word of the books would be, and I was right on the verge with them.

What gets me is that, as a fairly short book, Disney could have made a perfect adaptation in a scant two hours. Instead, they decided to cram so much “sequel potential” into 95 minutes to lose focus on any of the stories they were trying to adapt simultaneously. I also understand how the movie version is inclusive of all races and genders, but sometimes holding to how the characters were written in the book is the best route. After all, Judi Dench is a fine actress, but I was expecting a cigar-chomping man for Root, and not her.

While there are many neat scenes in this movie, some of which are in the books, they’re so disconnected that I lost interest fairly quickly. Overall, it’s just kind of “meh,” which might also be the source material’s fault. Sure, militarized and futuristic fantasy creatures is a neat idea, but if that’s all there is, then that’s all there is. I will give props to Disney for cutting some of the bathroom humor that the middle-grade book chose to include for humor purposes, but now they’re left with another sub-par adaptation of a beloved children’s book.

A jumbled mess that tried to do too much in too little time, I give Artemis Fowl 2.5 stars out of 5.