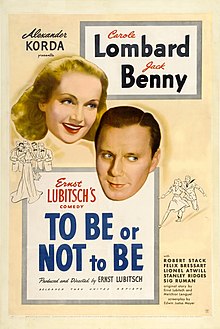 I don’t know about you, but I’ve found that World War II movies were released closer to the end of the war have a certain amount of emphasis that has seemed to fade with time. In fact, I’d almost wager that the comedies produced during the war are some of the most poignant films I’ve ever seen on the subject. Sure, making fun of Nazis is easy when you’re not affected by them—but when the threat is still real, there’s an amount of satire that can both entertain and thrill.

Much like Charlie Chaplin’s The Great Dictator (1940) that came before it, To Be or Not To Be (1942) works off a bit of mistaken identity and farse to make the jokes that much funnier. The comedy in this film is expertly carried by a young Jack Benny—who manages to gnaw on every piece of scenery in every shot where he’s allowed to work his comedic magic. What’s more impressive in this movie is how the thrilling dramatic tension that acts as a counterpoint to the comedy is so expertly woven together to make the two sides of this narrative ebb and flow with nail-biting suspense and laugh-out-loud jokes.

Considering that the war was still going on in 1942, it’s interesting how our hindsight colors our interpretation of To Be or Not To Be. If the Nazis had won the war, I don’t think they’d have looked at this particular creative product with any lenience. The bold realities of those in Poland may have come as a surprise to the movie-goers in America who might not have been aware of what the Europeans were dealing with at the time. Sure, Jack Benny brings in the laughs, but the plot considers the plight of millions. Consequently, this isn’t a perfect film, but it certainly comes close.

An expert mixture of comedy and suspense, I give To Be or Not To Be 4.5 stars out of 5.