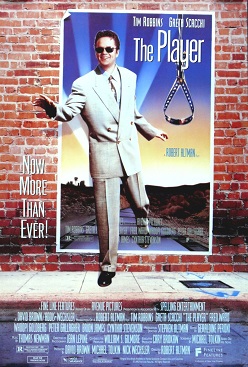 Those who are aware of Robert Altman’s other films are sure to recognize the themes that permeated his oeuvre. He always seemed to find a way to satirize something in a way that underscored how broken the system is. From the military in M*A*S*H (1970) to the music industry in Nashville (1975), Altman had a keen eye to bring the ridiculous nature of these anthropological machines into the spotlight. Clearly, his time in the movie industry helped him adapt Michael Tolkin’s novel into The Player (1992). In a weird and meta way, nothing has changed since its early-90’s release.

If you’re playing the “6 Degrees of Kevin Bacon” game at home, this film is literally a “who’s who” of actors and movie personalities (many of whom appear “as themselves”). Unfortunately, this film does suffer from its early-90’s aesthetic, often highlighting how far we’ve come in terms of fashion and technology in nearly three decades. Weirdly enough, though, many of the pitches for movies given in this film are exactly how I imagine these kinds of projects get made, even today. There’s almost a timeless quality to how Hollywood works, and it’s on full display here.

Of course, the satire here is that Hollywood is an industry. Films will often start as good ideas, but are crammed into the mold of the “successful” formula to ensure the studio gets the most bang for its buck. Initially, I felt that The Player was a so-so story with an almost absurd murder mystery running alongside the usual Hollywood hustle and bustle. Then I got to the end. It’s stunning how a movie about making movies by cramming them into boxes for maximum audience returns also seems to abide by these same rules, thus making it look much more “woke” when the twist at the end hits.

An incredibly meta examination of the Hollywood formula, I give The Player 4.0 stars out of 5.