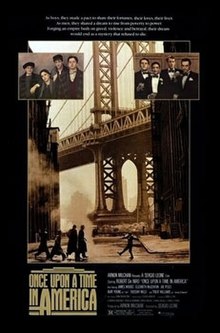 Nobody doubts Sergio Leone’s talent as a director. While he’s best known for his Spaghetti Westerns, he did make a few films like Once Upon a Time in America (1984). One does wonder if Leone was given free rein with this film, as it was probably an hour longer than it needed to be and included a lot of situations that could have been cut out, or at least trimmed down. If anything, it’s clear directors like Quentin Tarantino were influenced by movies like this, considering some of the similarities between it and Once Upon a Time…in Hollywood (2019).

I will admit that most of the scenes in this fractured timeline of a story were necessary. Something that was shown early in the film would inevitably come into play near the end. However, I don’t think this excuses the numerous (and gratuitous) sex scenes included in this film. With a run time of almost four hours (including an intermission to boot), at what point does the audience understand what’s happening while the movie continues beating a dead horse. Granted, when a film like this is basically three separate movies with these characters at three different times in their life, it can mostly justify being this long.

While Once Upon a Time in America is a distinct piece of Americana (read: Jewish mobsters in New York), I can’t help but recognize its notoriety due to its actors. With big players like Robert DeNiro, James Woods, and Jennifer Connelly involved, it’s no wonder why it remains one of Sergio Leone’s best films. Of course, I still consider his “Dollars Trilogy” to be better, if for no other reason than for the setting and cinematography. However, there were plenty of film techniques (like the numerous crane shots) that make Once Upon a Time in America a master class in how to shoot a film.

An overly long Sergio Leone epic, I give Once Upon a Time in America 3.5 stars out of 5.