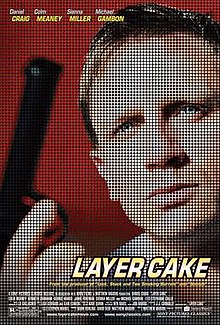 I always find it interesting to go back and watch breakout films by directors who would come into their own years later. In the case of Matthew Vaughn, I have enjoyed his work, which includes Stardust (2007), Kick-Ass (2010), X-Men: First Class (2011), and the Kingsman franchise. With Layer Cake (2004), I could see the kind of filmmaker he would become—with plenty of neat visual tricks—but there’s so much that’s lacking polish that I’m not even sure what happened in this movie. I kind of got the general sense of the plot, but I found myself lost by what was happening by the end of it all.

Perhaps part of my problem is that the action is quite loud, but the dialogue is all quiet. I kept having to adjust the volume on my surround sound as a result. Maybe I should have put subtitles on because I had trouble understanding what most of the characters were saying through their thick English accents. Still, this movie had a lot of scenes that were—for lack of a better term—just there. I hate any movie that does close-up camera work of someone sloppily eating with their hands, even if that character receives their comeuppance in a randomly violent event only minutes later.

I will attest that Daniel Craig’s performance was quite exemplary, and is likely the reason why he was cast as James Bond 15+ years ago. If anything, Layer Cake should be seen as Craig’s resume for the iconic Bond character. In the end, this film isn’t wholly un-redeemable; it just felt unnecessary. Sure, every director should start somewhere, but maybe we don’t always have to go back and see where they started. We might end up disappointed with the result since we expect the refined work that drew us to these directors in the first place.

Hints of Vaughn’s and Craig’s future successes, I give Layer Cake 2.0 stars out of 5.