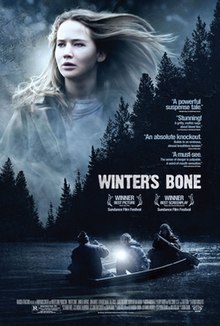 It feels like so few films deal with the actual consequences of poverty. It’s probably why Winter’s Bone (2010) seems like a raw and unflinching examination of what happens when a family is on the edge of homelessness. In fact, while I’m sure there are some inaccuracies, I almost saw this film as a documentary of life in rural Missouri. The handheld camera style was intimate and present as it followed Jennifer Lawrence in one of her breakout roles, investigating where her father disappeared to in order to save her struggling family.

I didn’t understand why so much of the community around Lawrence’s character didn’t come to help and support her in a time of need. Sure, her father did some pretty terrible things, but why punish his family because of it? Perhaps this is just an aspect of the dog-eat-dog world of rural poverty that seems so illogical to me. In the end, they eventually came around, but not without plenty of trouble for the teenage girl just trying to find her deadbeat dad. The amount of courage and fortitude that this young woman had to keep her family afloat speaks volumes about her character.

Because there was this realism in the way Winter’s Bone was filmed, the violence felt much more visceral than in some gory action or horror flick. Even the scene at the lake seemed excessive, even if nothing was shown on camera. What made it more impactful was that none of the violence was necessarily gratuitous (with perhaps the lake scene being an outlier). It was all there for a reason, even if that reason was that people are terrible to each other. Still, this gripping film deserves a watch, if for no other reason than Jennifer Lawrence’s superb performance.

An unflinching look at the effects of rural poverty, I give Winter’s Bone 4.0 stars out of 5.