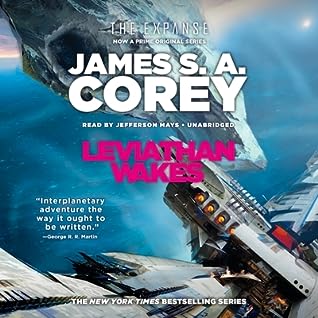 For years, my co-worker has been suggesting that I read the Expanse series of books. Before I finally got around to the audiobook for Leviathan Wakes, I took a slight shortcut and watched the television series on Amazon. This came in handy because I was able to pick up this book and immediately be able to visualize what was happening and who the characters were. Sure, the actors cast in the show are slightly different from their literary counterparts. Still, overall there was a lot in this book that I had already experienced with the television show.

I will applaud this book for being a hard science fiction story, but not shoving the calculations in the reader’s face. Sure, The Martian did an excellent job of explaining all the scientific challenges of interplanetary travel. However, Leviathan Wakes took this a step further and created a universe that’s still controlled by the same physical laws we encounter in the real world. Unless you know what you’re looking for, you’d never realize that the little ways to make life livable in outer space would manifest in the forms presented in this series. Basically—to quote the title of a Heinlein book—Gravity is a Harsh Mistress.

And while the television show had lots of different plotlines to follow through its four seasons, I do like how Leviathan Wakes focused on just two main characters and the discovery of the Protomolecule. Although—even though both characters came from different backgrounds—I would have expected their reactions to situations would have been more drastically different than they were. Still, even if both Miller and Holden felt like very similar characters, they were both written well enough that it was an entertaining ride, nonetheless.

A perfect blending of story and hard sci-fi, I give Leviathan Wakes 4.0 stars out of 5.