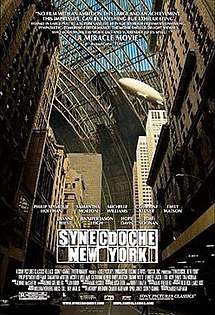 I’m all for “smart” films that make the audience think. However, I am not a fan of movies that are so intellectually up their own behind to obscure every piece of meaningful plot and character development behind metaphor and “art.” There is a point where the plot gets so convoluted that it’s practically incomprehensible. Sure, I could probably watch through this movie again and try to piece it all together; but after this first viewing, I don’t think that’s worth my time. And if there’s anything that this movie taught me, it’s that time is important.

Despite the confusing mess that this film possesses, there are occasional glimpses of heart and brilliance. They’re almost poetic in their simplicity and clarity. Moments like walking through the empty streets of an enormous theater set while an inner-ear soliloquy pontificates about the fleeting nature of life and our desire to find meaning in ourselves and our relationships with others (or something like that…since it was hard to follow at times) are almost worth it. If you enjoy films that consider themselves “high art,” then this movie is probably for you. If not, save yourself some time (and confusion) and stay away.

Art for the sake of art and at the detriment to sense, I give Synecdoche, New York 2.5 stars out of 5.