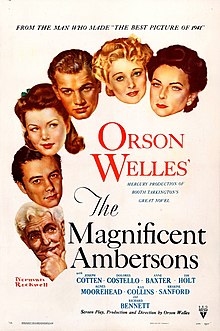 Some films are timeless classics, like Citizen Kane (1941), then some are doomed to live in their shadows like The Magnificent Ambersons (1942). It’s easy to see how a success like Citizen Kane would incentivize studios to let Orson Welles direct another film in the hopes that he’d surpass himself. Unfortunately, I don’t feel The Magnificent Ambersons ever achieves that level of cinematic notoriety, merely acting as a footnote to much more famous films. Consequently, this movie hasn’t necessarily aged as well as its 1941 counterpart.

I’ll still give credit where credit is due and say that The Magnificent Ambersons contains the visual charm and bold style that defined Orson Welles’ films. If only the story and characters were memorable enough to care about, then we might have a good movie on our hands here. As it stands, I didn’t care for any of the characters, nor did I even feel invested in any of their stories or motivations (such as they were). Mostly, it seemed like drama for drama’s sake (somewhat similar to how I feel about East of Eden (1955)).

At the time, I’m sure the irony of individuals who didn’t buy into this whole “automobile craze” looked silly to those who drove to their local theater in their car. Almost 80 years later, this conflict seems even more stupid, which is unfortunate considering how integral it is to this “riches to rags” story. Sure, The Magnificent Ambersons has received some accolades over the years, but I guess I’m probably in the minority of film critics who didn’t care for it. Although, if I were able to see Orson Welles’ uncut version, perhaps my opinion of it would be much improved.

A sub-par Welles film that hardly comes close to Citizen Kane, I give The Magnificent Ambersons 2.5 stars out of 5.