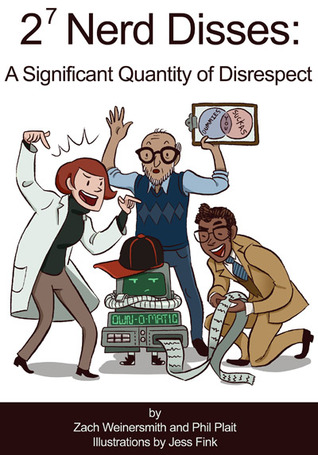 Have you ever been in an argument and had a stinging zinger of a remark that would have left the other party completely devastated? I’m sure plenty of socially-awkward nerds have been in this situation, which is probably why this book exists in the first place. 27 Nerd Disses is a small collection of witty comebacks that cover a variety of brainy topics. From economics to mathematics, all 128 of these insults require some amount of knowledge of their source material to get the joke they’re trying to make. Unfortunately, this book contains some knowledge at levels higher than a basic college education.

While I understood a good majority of the nerdy references in this book, the parts of these disses that I had trouble with were the references that the uncultured masses were likely comparing these heady subjects to. This ends up being the problematic crux of this book: to get the joke, you have to know the nerdy reference and the common confusion related to its naming. A lot of the times, I completely missed the low-brow part of the joke, and the appendix that explained all the geek speak of the jokes hardly ever broached these misunderstandings.

Furthermore, the fact that there needs to be an appendix on a book of jokes that explains them defeats the purpose of the jokes in the first place. It doesn’t help that the explanations don’t do their subject matter justice. Many of them felt like “Oh, you didn’t get this joke about some principle in physics? Well, the joke is that this is a principle in physics and not some homophone.” I’ll admit that at least a few of these disses were clever, and at least one made me laugh out loud, but overall this was probably a book that didn’t need to be written.

A book full of jokes most people wouldn’t get, I give 2⁷ Nerd Disses 2.0 stars out of 5.