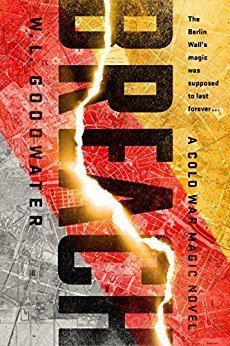 It’s always interesting to see an alternate take on history where fantastical elements can help explain some mostly banal events and activities. In Breach, the reader is offered a glimpse into the top-secret realm of magicians in military espionage. Most of my knowledge of Cold War Berlin is based on pop culture representations, so there wasn’t anything too out of the ordinary here that would scream of historical inaccuracies. If anything, Breach almost felt like it could have been an extension of the Harry Potter/Fantastic Beasts franchise with how well it integrated history and magic.

While there was perhaps a bit too much browbeating over women’s role in society during the Cold War, the pacing, twists, and characters were excellent. It was a little difficult to tell the timeframe of this book, but I assumed it was probably in an alternate 1950s, based on the context clues. Of course, with the pacing of a modern thriller, Breach seems to get away with fully explaining the details of many of its characters’ motivations. I was sucked into the story enough that I didn’t care too much, but it was a nagging that gnawed at the back of my mind as I read.

For a first book, author W.L. Goodwater certainly put forth an admirable effort. The way plot points are set up and revealed was very entertaining, even if some of the finer points of the plot seemed to be repetitive to make sure the reader understood them. There was a lot of thought put into the magic system in this book without spending tons of time in exposition going over how it works, which I appreciate. There was also some solid character growth for both major and minor characters throughout this book, which is yet another reason why I think people should read this book.

A thrilling alternate history fantasy adventure, I give Breach 4.0 stars out of 5.