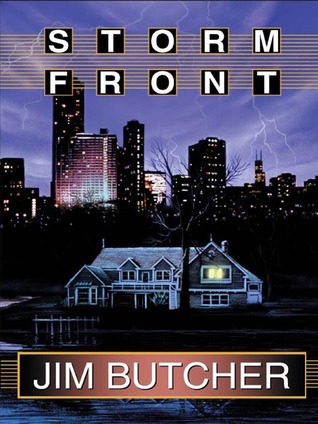 The first book in the Dresden Files series, Storm Front is the fusion of urban fantasy and detective noir that I didn’t know I needed. As a wizard for hire, Harry Dresden gets a lot of weird cases that only a wizard could deal with, but it’s done in a way that hearkens back to Sam Spade and other detectives just trying to make a buck investigating mysteries that show up on their doorstep. Perhaps I just haven’t read any modern noir (most of it supplanted by the “thriller” genre), but Storm Front is a refreshing return to a classic form of storytelling.

Of my two qualms, only one has to do with the book itself. The narrator of this audiobook had a bit too much breathing, sniffling, and other noises that—while being somewhat infrequent—pulled me out of the story far too often. And while I liked how there was always something for Dresden to do, the multitude of different storylines left me a little confused at times. Still, each of these storylines inevitably contributed to some part of the plot as a whole, so I can forgive the multitude of spinning plates.

As for the fantasy aspect, I could tell a lot of thought was put into how magic works in the real world—or at least in Chicago. Translating something usually confined to sweeping pre-industrial landscapes into a modern equivalent is no easy task, and Jim Butcher did an excellent job of making everything seem logical and natural. For the first book in a series, Storm Front is a strong step forward into any number of interesting stories. The foundation is set, and I look forward to seeing how Butcher builds upon it in subsequent volumes of the series.

The detective noir urban fantasy I didn’t know I needed, I give Storm Front 4.5 stars out of 5.