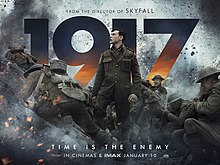 While there have been movies filmed to look like they’re one long take (the Best Picture winner, Birdman (2015) comes to mind) and movies that revolve around key moments of retreat during war (Dunkirk (2017) comes to mind), never before have the two been so masterfully combined. 1917 (2019) is a rare piece of cinema that tackles the less-popular World War I as its subject matter, but doing so in a way that’s personal, gruesome, and tense. Those viewers who might be put off by the gore of this film might come to realize that cinema has been censoring the ugly side of war for far too long.

None of the violence seems out of place in 1917. Its moments of horror highlight the ugliness of war that results in constant and ever-present death. Fortunately, there are enough moments of peace and rebuttal between these intense sequences to let the audience catch their breath. Because, after all, the one-shot style of this film is breathtaking all on its own. The ability to pull something like this off, with brilliant peaceful bookends encapsulating intense action, makes 1917 a generation-defining movie that will likely remain as a landmark of cinema for years to come, regardless of the awards it does or does not win.

Sam Mendes’ career is just as varied as that of his contemporaries (Christopher Nolan comes to mind). After winning Best Picture with his breakout film, American Beauty (1999), Mendes has dabbled in almost every genre, including comedy (Away We Go (2009)), period drama (Road to Perdition (2002)), and franchise success (Skyfall (2012)). It’s a testament to his skills as a director to show how far he has come in 20 years. Sure, American Beauty was good for its time, but I think 1917 is excellent beyond any annual awards cycle. It could be the kind of film you only see once in 202 years.