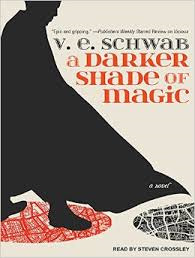 A co-worker of mine suggested I check this book out, and I have now finally gotten around to it. While he gave this series of books a glowing review, I can only hope that the other books in this trilogy fare better than this one. For what it was worth, A Darker Shade of Magic didn’t seem to be original enough for me to care much about what happened in it. It’s filled with so many fantasy and YA tropes that I could almost swear I’d read the same book somewhere else before.

Perhaps part of my problem comes with the audiobook production of this story. I generally liked Lila, except when she was particularly annoying. There were quite a few times the narrator made her sound like Audrey Hepburn in the early part of My Fair Lady (1964), and that’s not much of a compliment. Overall, though, I can understand how the first book in a series can be dry just based on the fact that it has so much exposition and world-building to do to lay a foundation for the next books.

And maybe the “generic” feel of this book comes from the logical nature of a magic system closely tied to blood? I like the concept of the parallel Londons, and the action sequences near the end were reasonably exciting, so there is some merit to this book. It’s more that everything felt so flat and uninteresting, even with a compelling topic like blood magic tying everything together. While I wasn’t necessarily impressed with this book, I’ll continue to be my stubborn (or perhaps masochistic) self and continue with the rest of the series to see what all the commotion is about.

A generic YA fantasy with a few shining moments, I give A Darker Shade of Magic 3.0 stars out of 5.