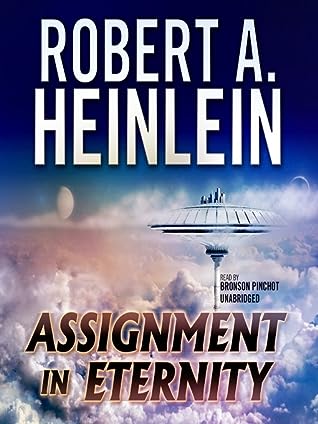 Back in college, my first introduction to Heinlein was Stranger in a Strange Land. I had to read this book for my “Science in Literature” course, and I found it moderately interesting. Since then, I’ve read other Heinlein books like Starship Troopers and The Moon is a Harsh Mistress, but I didn’t realize how dedicated Heinlein was to some of his “supernatural” themes until I read Assignment in Eternity. Sure, most authors will have some concept or idea that they like to revisit. Still, the fact that a majority of Assignment in Eternity ’s included short stories deal in some way with “superhumans” must mean something.

The whole concept of ESP and “evolved” humans isn’t interesting to me since I don’t think there’s much that can be done with the concept. While Stranger in a Strange Land covered most of the bases, Assignment in Eternity doesn’t really expand the ideas any further. If anything, Stranger in a Strange Land was the culmination of Heinlein’s obsession with this topic. I think, in the end, the whole idea of telepathy and other mind powers isn’t science fiction as much as the ideas explored by Ray Bradbury or Isaac Asimov.

Because Heinlein could fill a book with short stories mostly centering on this theme speaks volumes about the overall topics in his writing. If you’re into this kind of story, then Assignment in Eternity is an excellent addition to the classic that is Stranger in a Strange Land. If anything, Heinlein is consistent in his style, even if it makes short stories like this somewhat repetitive to the other stories and books he’s written. Like other short story collections, I would have liked to see some more variety in what was presented here, but I suppose beggars can’t be choosers.

More of the same Heinlein, just in smaller chunks, I give Assignment in Eternity 3.0 stars out of 5.