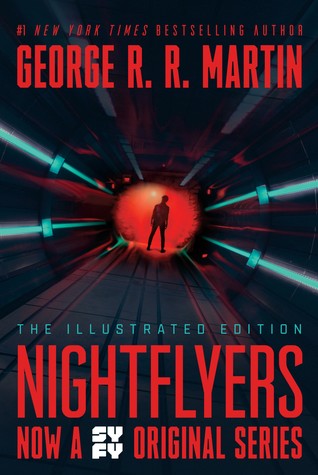 Those who are familiar with George R.R. Martin’s Song of Ice and Fire fantasy series may be lamenting the end of the semi-faithful Game of Thrones television show. In the time we’ll all have to wait until the next Song of Ice and Fire book comes out, there are other little stories from this author to satiate our appetite. Nightflyers is a short novella by Martin that also seems to be hinging itself on the success of Game of Thrones, albeit in the science fiction genre instead of high fantasy.

Considering how verbose Martin can get with his works, it was almost refreshing to read a story that was so focused and short. Granted, even though Nightflyers is science fiction, all of the notable George R.R. Martin elements were present: mainly, sex and violence. Depending on your tolerance of these elements, I can say that they’re at least naturally integrated with this novella. Martin certainly seemed to have an adequate grasp of sci-fi to give this story a satisfying twist that drove the plot into the denouement.

Without giving too much away, I did appreciate the science (and pseudo-science) that was used to create an interesting story. Or, at least, the story was written in such a way—with a dash of horror sprinkled in to engage the reader—that prevented me from being bored with it. If it had been expanded out into a full-size book, I’m sure I could see where plenty of fluff could have been added in to reach the required word count. In the end, I’m glad that Martin kept this short, which works primarily to the story’s benefit.

A quintessential George R.R. Martin sci-fi novella, I give Nightflyers 4.0 stars out of 5.