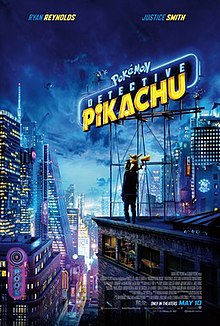 The transition of nostalgia into live action can be a tricky business. Plenty of franchises have faltered in this aspect, so it was interesting to see Pokémon approach it from a side angle. Instead of adapting the core series of games or anime to a live-action adaptation, they instead used a spinoff game as the framework to create this movie. Despite my initial skepticism, I can honestly say that Detective Pikachu (2019) works much better than any video game franchise adaptation before it. It’s not entirely perfect, but it came a lot closer than any of its predecessors.

On the plus side, the “realistic” Pokémon were enthralling—if not wholly terrifying (I’m looking at you, Ludicolo)—to see in a real space interacting with humans. I already had a bit of a visceral reaction to seeing realistic fur, skin, and feathers on Pokémon when I played Pokken Tournament DX. At least they certainly seemed to be at home in this world that the filmmakers created. Nothing seemed out of place, which was a testament to the team who managed to remain reasonably faithful to the source material of the franchise. I was almost frustrated with how fast some scenes zipped past, as I wanted to pause and see if I could identify all the Easter eggs and references.

While this certainly satiated my nostalgia, some moments reminded me, “Oh, yeah . . . this is a movie for kids.” Sure, Ryan Reynolds gets a few lines in that the parents in the audience will laugh at, but there was this weird in-between space where I could identify with the main character even if the plot was simplified so the youngsters could understand it. I know they’re going to try and appeal to the broadest demographic possible, which just so happens to have a wide age range due to the fact that Pokémon is still a relatively strong franchise today as it was over 20 years ago.

A surprisingly faithful franchise adaptation into live action, I give Detective Pikachu 3.5 stars out of 5.