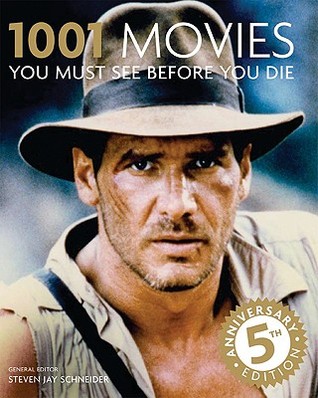 As a movie aficionado, it was only a matter of time before I picked up this book. At the time, the 5th edition covered most of the films that were out at the time, but I do realize there are more recent versions of this book that include some of the latest hits of the last decade. Not one to use this book as a simple desk reference, I took the time to sit down and read through the reviews of these 1,000+ movies. In the time since buying this book, I’ve managed to increase my percentage of films seen, but there’s still a long way to go.

Even before I started reading this book, I had already seen a good portion of the movies mentioned, many of which won critical awards for their achievements. With a concerted effort, I’m now sitting at 42% of these 1001 movies seen in my short lifetime. Having read the reviews of the rest of them, I can honestly say there are still plenty of films out there that pique my interest. Many of these cinematic masterpieces are merely unwatched because I haven’t gotten around to them yet, despite their cinematic accolades.

Overall, though, there were times where I’d watch a movie contained on this list and wonder, “why is this here?” 1001 films is a lengthy list, so there was undoubtedly going to be “filler” on this list. Then again, everyone’s tastes are different. While I feel movies were missing from this edition (likely removed from previous versions to make room for newer ones), it’s still a robust set. Not everything is “artistic” or “award-winning,” which is fine because, as the book mentions, “Sometimes you want a nice steak, and sometimes you just want a greasy hamburger.”