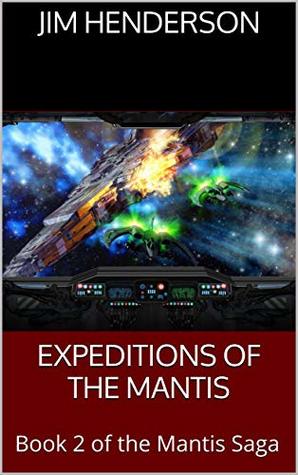 Sequels are interesting creatures. While the onus of the first book of a series is to lay out some ground rules of the universe and introduce us to the main characters, any follow-on books should dive a little deeper into the characters and explore some of the conflicts that drive the universe. Expeditions of the Mantis attempts a bit of the latter when compared to Jaunts of the Mantis, but ends up falling into old patterns by the end of the book. If anything, I have more questions about this universe now than when I started, since Expeditions of the Mantis only scratched the surface of some fascinating topics.

Unfortunately, while the crew of the Mantis was the most interesting aspect of Jaunts of the Mantis, the dynamic didn’t work as well in this sequel. If anything, the inability to add in a strong “third character” (a role held by the preacher in the previous book) highlighted how one-dimensional these characters were. For instance, I thought the android Peter didn’t have much of a personality to make him stand out as a member of the crew. Additionally, the rules about “robot discrimination” seemed to be inconsistent and were almost jarring when they whipped into the forefront of the plot.

While the concept of an intergalactic war seems like it would be an exciting backdrop for the crew of the Mantis, I would have appreciated slightly more foreshadowing of it in the first book. This semi-main plotline almost seemed to be forgotten entirely about mid-way through this book, or at least it wasn’t more fully ingrained in the story for it to feel like it affected anything other than what the crew was already doing. Perhaps this muddled the waters of each “jaunt” here, as each chapter didn’t necessarily hold to a singular purpose and often seemed distracted by other topics. Considering how quickly this sequel came out after the first book, and how the proofreading errors and typos remain, I’d suggest the author take a little more time in preparing the next book in the series.

A sequel that skips around the edges of anything deeper, I give Expeditions of the Mantis 2.5 stars out of 5.