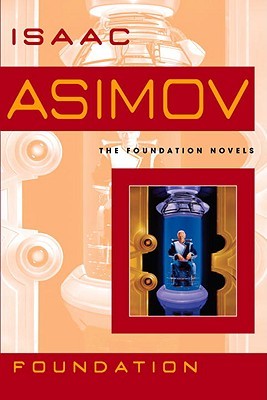 For years, people have asked whether or not I have read the penultimate science fiction series that is Isaac Asimov’s Foundation. Up until now, I could not say that I had. While I knew the series by its name, I hadn’t ever heard any comparisons or even knew what these books were about. This probably should have been my first indication of what to expect. I wasn’t expecting anything other than its notable status as a pillar of classic sci-fi. If anything, the fact each “section” of Foundation is its own short story says volumes about the origin of the genre.

Set within the same universe, Foundation follows five different groups across the timespan of a couple hundred years. Asimov explored a few different concepts and spent most of this book in world-building mode. I’ll applaud his ability to remain fairly consistent across these different stories, but the fact that there isn’t much that ties them together is the main issue I have with this book. Because they’re mostly five separate short stories, there’s not too much “action and consequence” between the different sections. This is what I would expect from a book with a standard three-act structure plot.

Additionally, I think the science fiction stories I tend to enjoy lean more on the “space opera” side than where Foundation lies. The fact that Foundation dives so deep into heady—and often controversial—topics like religion, politics, and economics is probably what lost my interest. Sure, there are some neat applications of technology that drives these topics. However, since it felt more like an academic lecture instead of an entertaining read, I glossed over a lot of the details. Maybe the other books in the series remedy this but for Foundation I just kind of felt “meh” about it.

An OK start to a highly-lauded science fiction series, I give Foundation 3.0 stars out of 5.