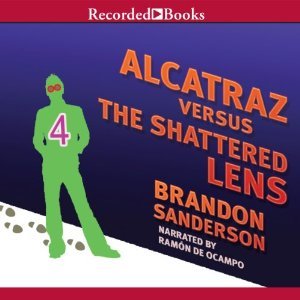 After reading through the last two books in Brandon Sanderson’s Alcatraz series, I was hesitant to continue with the fourth book, Alcatraz Versus the Shattered Lens. What I found innovative and hilarious in the first book had become a bit more annoying by books two and three. Book four, however, was a refreshing addition to the series. It helped that the jokes were funny enough that I actually laughed out loud. Moreover, the lore and overall arching plot of the series seemed to coalesce into something that made sense and was actually driving toward a satisfying conclusion.

While I can’t completely disregard the previous two books in the series, I felt that there was probably enough backstory explanation in Alcatraz Versus the Shattered Lens that these other books could be potentially be skipped over altogether. After all, we learn a lot about Alcatraz, his family roots, and the Smedry talents in this book, and I almost wonder if some of these plot points couldn’t have been spread out into previous volumes. It also helped that this book had a clear goal and objective to drive the story toward its various conclusions.

In previous books in this series, Alcatraz has announced that he is awesome or a liar. Here, he admits to being “stoopid,” which adds some humility to the character that had perhaps been missing earlier in the series. There were plenty of other things I liked about this book, including the chapter numbers, the “Shakespearian chapter,” and Alcatraz’s cousin who is really bad at math. The twist near the end also added some realism to both the protagonists and antagonists that I’m now invested and want to see how the series finishes out in the next (and I assume final) volume.

A hilarious return-to-form and vital link for the Alcatraz series, I give Alcatraz Versus the Shattered Lens 4.5 stars out of 5.