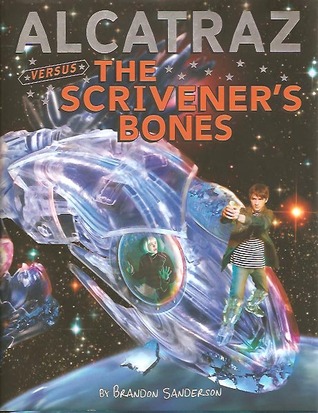 Earlier this year, I read Alcatraz Versus the Evil Librarians and absolutely loved it. Consequently, I had high hopes for the next book in this series, Alcatraz Versus the Scrivener’s Bones. While there was still the same amount of self-awareness and humor in this book, it felt a little…off. Perhaps I should have read these two books closer together, but I had some trouble coming up to speed in the beginning and wasn’t entirely sure why the “goal” of this book was to find Alcatraz’s father. In any case, Sanderson’s world-building is still in top form here.

Of course, the “cute” way that this series was self-aware when I read the first book was a bit more annoying this time around. It almost felt like every chapter had to have a soliloquy, even if it didn’t link itself to where the plot was at the time—which often broke the flow of the action. Similarly, while the randomness introduced in Versus the Evil Librarians did seem to have some purpose, it seemed to have less of a purpose in this book. It felt like it was randomness for randomness sake, even if some of it did eventually come into play.

Despite the things that made the first book endearing becoming a little more grating in this book, I did enjoy the magic system, and more in-depth explanations of the lore were explored in this sequel. Things like why the main character is named Alcatraz and a better explanation of the “powers” of his family members helped round out the questions that weren’t necessarily obvious in the first book but still needed to be answered at some point anyway. The action was fantastic (if not against all laws of physics), and I wouldn’t mind seeing how the relationship between Alcatraz and Bastille develops in later books.

An amusing and well-rounded “silly fantasy,” I give Alcatraz Versus the Scrivener’s Bones 4.0 stars out of 5.