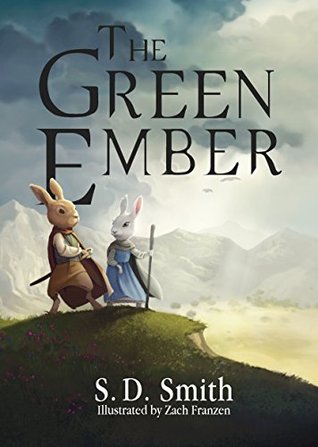 On the other end of the spectrum of “fantasy rabbit” stories from Watership Down, we have The Green Ember, the first in a series that probably could have been written without the animal trappings and still been a good story. Where Watership Down had very rabbit-like characters interacting with the human world, The Green Ember has very person-like characters interacting with an animal world. Occasionally, the attributes that make the rabbits unique were used—especially in the battle sequences—but there were often moments when I forgot that these characters were rabbits.

I felt the cuteness of rabbits, and the scariness of wolves and hawks, help reach a younger audience without directly confronting them with the realities of the scary world around them. After all, if it was people vs. people in this book, then the intended audience might miss out on some of the important morals and lessons contained therein. Having a clearly evil force in opposition to the rabbits helped to define who the good guys and bad guys were, while also leaving room for traitorous rabbits—which itself feels a little odd, considering the predator/prey relationship between the two sides.

Despite some of these weaker points, The Green Ember is a fantastic story. There might be a few too many characters at points, all with slightly different names for the same individual, but the complexity of the plot is solid enough that children should be able to follow along and parents will likely also be surprised by the few twists and turns it takes. Clearly the first part in a series, The Green Ember does an excellent job of wrapping up most of the activities and subplots it started, while also presenting a somewhat clear direction for where it will go in the future.

A fantasy adventure perfect for kids and adults, I give The Green Ember 4.5 stars out of 5.