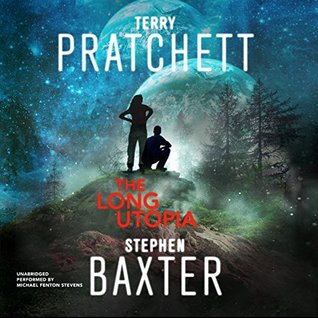 After the events that take place in The Long Mars, I was expecting the next book in the series, The Long Utopia, to be about the CEO of the Black Corporation and the settlement he established to help him live longer. Instead, I got a story that had little to no connection to the previous plots. That being said, at least there was a story with a projected conclusion instead of merely a series of random events that eventually led to the sudden destruction of some location (as had been the case up until now).

While I did appreciate some of the back-story for Joshua Valienté, there wasn’t anything in Joshua’s behavior or motivations in any of the previous books that indicated that he was even interested in learning about his past. I also was pleased that some of the “limitations” of this universe were brought back, or at least provided as a reminder to the reader. It honestly doesn’t make sense to me that these parallel worlds would have the kind of technology available to them without the use of iron. The fact that the material workarounds were never explained is probably the most frustrating part to me.

As I mentioned already, the stronger story in this book helped keep me invested in the characters, not only as they tried to figure out what was happening, but as they tried to determine how to stop it. Unfortunately, none of the consequences in this universe seem to hold any weight. Lobsang can “die,” but there are still plenty other versions of him around. The Next can be mostly exterminated, but then the next book just glosses over the attempted genocide. In the end, though, I can’t honestly tell you what the titular “Utopia” of this book was, and that’s disappointing.

A slightly above-average chapter in the Long Earth series, I give The Long Utopia 3.0 stars out of 5.