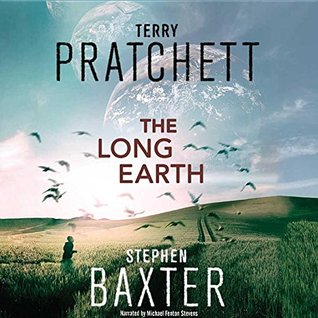 Having read a few of Sir Terry Pratchett’s books before, I am no stranger to the randomness of his writing style. Usually, he has some character or object that just doesn’t fit in a normal narrative, but he manages to work it in with an explanation that’s both natural and makes sense. However, this only works if Pratchett has control over the entire story. Unfortunately, as is the case in The Long Earth, the randomness that Pratchett brings to the table sticks out like a sore thumb from the rest of the mostly sci-fi story. For instance, does an artificial intelligence have to be a reincarnated Tibetan motorcycle repairman? If you want to take the story seriously, probably not.

In the end, this book seems to be mostly written by Stephen Baxter, with only a smattering of Pratchett’s charm thrown in occasionally for levity. I haven’t read any of Baxter’s other books, but I’m not sure if I’d want to, considering how The Long Earth was put together. First off, the entire book seems to be an exposition dump about “stepping,” which is the process wherein people can move from one parallel universe into another. None of the narratives seems dedicated to anything in particular. With no goal in mind, the story will often get distracted away from the main character during little vignettes that explore some of the potentials of the multiverse theory presented therein.

I did appreciate the amount of thought that went into the limitations and peculiarities of stepping between parallel Earths, but when that’s the only focus of the book, it tended to get repetitive. So often, I’d be listening to this audiobook and realize that there wasn’t much dialogue between these characters; they were mostly spewing out more explanation about the Long Earth in a series of expository dumps of information.

A book full of sci-fi exposition, I give The Long Earth 2.0 stars out of 5.