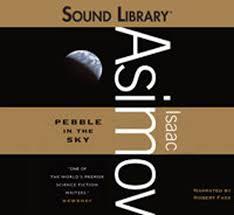 As I pulled together some of the information for this review, I became aware that Pebble in the Sky was Isaac Asimov’s first novel. To be honest, that explains a lot. I’d read a few Asimov books before—I, Robot being a personal favorite—so I was a little disappointed with this story. If anything, it showed Asimov’s potential for bigger and better stories, or at least stories that were a little more focused. As it is, Pebble in the Sky provided the groundwork for prequels and some of Asimov’s best writing, but it remains fairly rough in comparison.

Some of the ideas in Pebble in the Sky are certainly noteworthy, including an age limit for humans and telepathic abilities. We also see here the ability of science fiction to address social issues as well. In this case, racism was the topic du jour, which was definitely in the early edges of revolution in 1950. And yet, the political commentary wasn’t nearly as subtle here as it could have been. Furthermore, while the more fantastical ideas presented here had some merit, their execution probably needed a little extra work. It’s a good first book, but it’s far from perfect.

It’s weird to me that I found a book by Isaac Asimov so mediocre, but I suppose that merely accentuates how great an author he eventually became. His future works would subsequently have the greater depth of thought that went into their premises and science, but as Pebble in the Sky shows us, that wasn’t always the case. There almost seem to be too many ideas crammed into this book to allow adequate time to explore each one. Consequently, when it jumps around from one subplot to another, it can be a little easy to get lost in the transition.

Isaac Asimov’s adequate first novel, I give Pebble in the Sky 2.5 stars out of 5.