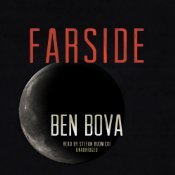 I had never heard of this author before picking up this audiobook to read—I just thought the title and cover looked neat—but apparently he’s been writing science fiction for a few decades now. It shows. While I’m not entirely certain that this 20th part in the “Grand Tour” series connects to any other parts written before it, Farside does stand by itself as a story. Unfortunately, the story’s not that good. It almost seems as though the “old rules” of golden-age sci-fi live on through this author, which allowed for this misogynistic piece of fiction to be written in the new millennium.

Much like Fire with Fire, there seems to be some sort of checklist that authors trying to imitate the pulpy origins of sci-fi are using to create their modern works. These tired tropes need to stop. Especially the tropes that have to do with the blatant sexism. None of the sex in this book had any grounding in reality or common sense: it all seemed to happen merely to check an item off a list. If these stories are allegedly set in the future, then why aren’t the characters acting “more woke” than the people who exist today?

While I did appreciate the interesting scientific ideas presented in this book, the “mystery” that evolved out of it was confusing at best. It didn’t seem clear why the antagonist—who seemed to almost appear out of nowhere—did what they did, thus leading to the peril of the people on the moon. I also found the repetition in this book to be slightly annoying. When I kept listening to the audiobook and wondered if it had somehow skipped back to a previous section when a fundamental concept was repeated, almost verbatim, then there’s obviously a problem with the exposition in the writing.

An artifact of the antiquated and sexist “rules” of golden-age sci-fi, I give Farside 2.0 stars out of 5.