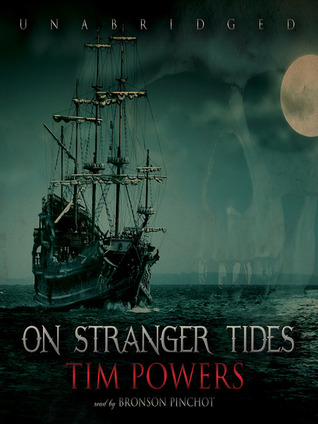 Since I knew the fourth Pirates of the Caribbean movie was based on this book, I decided to give it a read to see if it was any better than the so-so extension of the Pirates franchise. Let’s just say that this book was a loose inspiration for the film. About the only elements that survived the transition were Blackbeard and the Fountain of Youth. Of course, even the movie version vastly improved the Fountain. In fact, I think I prefer the Pirates movie of the same name, even if the two don’t share much in common.

I will say that On Stranger Tides does excel in its action sequences. The fights and battles are choreographed and described in such a way that is entertaining to read and comprehensible to understand. Unfortunately, a book full of fight sequences does not a good story make. Events in this book just seemed to happen, almost at random, and with no foreshadowing of what was to come. This made it difficult to follow, especially as the story seemed to jump from character to character, so I had to remember what was happening in each of the plotlines all at once.

I got the sense that this book didn’t know what it wanted to be, mostly because it had so many main characters that it never had enough time to devote to any of them. Some of these characters never had clear motivations, or if they did have goals and ambitions, they weren’t revealed until much later in the book. The magic system could have been a little better fleshed out, as there didn’t seem to be any consistent rules or reasoning behind the effects the magic created. Overall, I was mostly disappointed with what this book could have been.

Some good action sequences drowning in too many subplots, I give On Stranger Tides 2.5 stars out of 5.