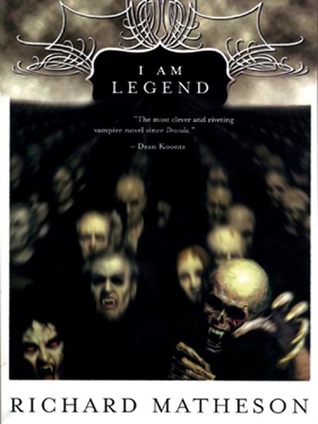 After listening to this audiobook, it became abundantly clear why this story was adapted into a movie on three separate occasions (the most recent being the 2007 movie of the same name). While this latest adaptation didn’t seem to emphasize the “vampire-ness” of the creatures as much as its source material, many of the elements of the story were still present. In fact, I now prefer the original story, as its prose was almost poetic at times in its descriptions of the main character’s struggle to survive. While the ending wasn’t particularly satisfying in either incarnation, the plot development was superb.

I appreciated how the author was able to strip away the superstition that surrounds vampires and look at these fantastical creatures in a more logical and scientific light. Why do vampires hate garlic? Why does a stake through the heart kill them? Do crosses work against vampires who are Jewish or Muslim? His explanations of these well-known trappings of the vampire were as interesting in their revelation as they were in their research. Almost makes me wish that other “horror monsters” had the same treatment since it helps to make their existence somewhat more plausible.

As for the “other stories” included in this audiobook, it soon becomes clear that Matheson is a master of the macabre. Even if the remaining stories don’t necessarily pack the same impact of I Am Legend, many of them are entertaining enough to round out the experience. The narrator’s voice acting certainly added to the characterizations of these other stories, even if seemed a little over the top at times. Overall, these other stories might have been somewhat unnecessary, as I Am Legend can hold its own by itself. Still, the whole collection was entertaining, so I’d recommend it to anyone who likes to read horror.

A poetic and logical examination of a vampire-induced apocalypse, I give I Am Legend and Other Stories 4.5 stars out of 5.