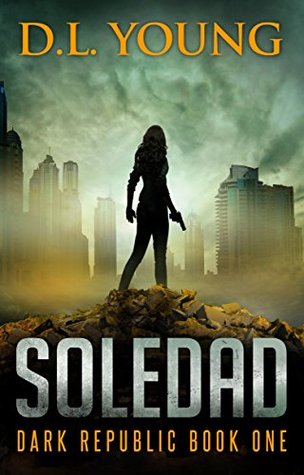 This first book in the “Dark Republic” series is a prime example of the New Adult post-apocalyptic genre. I wouldn’t classify it as Young Adult due to the graphic nature of sex and violence, as well as the amount of obscenity peppering the dialogue. I’m not necessarily saying they’re bad things, as they help to define the world created by the author, it’s more that the audience should be prepared for these things. Even more to the point, the one sex scene present in this book was probably more along the lines of rape, even if it was a common element of the characters’ backstories.

Regardless of the content, the story in Soledad is compelling enough. Considering this is the first book in a series, the author spent almost the entirety of it exploring the three different factions present in post-apocalyptic Texas. While this was great for world-building, by the end of the book, little seemed to change for the titular character. Sure, she had some more answers, and her freedom, but the “deus ex machina” that returned her back where she started made me wish there was at least a hint of where the series would go from here.

I will applaud the few twists present in the plot, as they helped tie loose ends up and made the narrative a cohesive whole with no need for further explanation. The world created in this book also seemed very real and logical. Of course, with the heavy Mexican influence in this post-apocalyptic Texas, there was plenty of Spanish sprinkled throughout the dialogue. It’s been a long time since my high school Spanish class, so half of the time I had no idea what they were talking about. I don’t think these moments necessarily changed the plot any, as they were window dressing for a vivid world created by the author.

A pretty good post-apocalyptic New Adult novel, I give Soledad 3.5 stars out of 5.