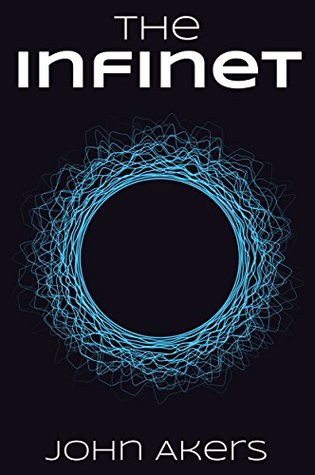 After reading plenty of sub-par first novels from aspiring authors, The Infinet was a breath of fresh air. I was also pleasantly surprised that this book was written during a National Novel Writing Month, thus proving how useful the NaNoWriMo challenge is for people to get their stories out there. In the five years between the writing and publishing of this book, it looks like a lot of care went into polishing it into the entertaining and brilliant book that exists today.

There are plenty of things that The Infinet gets right when it comes to speculative science fiction. First, it doesn’t dwell on the details of the “hard science,” but it does mention the concepts in passing. As far as I can tell, the ideas presented here are accurate, which is key for this genre. Secondly, so many authors put their personal biases into their narratives, which can sour the experience for anyone who doesn’t agree with them. John Akers does a fantastic job of being mostly neutral on hot-button topics by presenting both sides of the arguments in an evenhanded and non-confrontational style.

And while I loved a lot of the little references and clever wordings (like the eponymous Infinet), the book still has a few flaws. The “history lesson” was perhaps a little bloated, some of the logic decisions of the kidnappers seemed odd, and the action near the end was initially confusing despite being explained afterward. Despite these things, the characters were well-rounded and realistic, if not an outright joy to follow along as the plot weaved around them. The fact that there was little to no “fluff” in the interconnecting pieces of the plot (another strength) was just the icing on the cake.

A prime example of how to do speculative hard sci-fi correctly, I give The Infinet 4.0 stars out of 5.