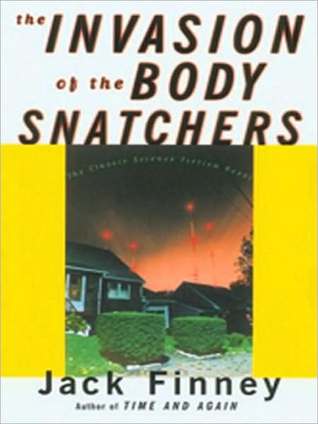 Most people know this book by its numerous film adaptations, including Invasion of the Body Snatchers (1956 and 1978), Body Snatchers (1993), and The Invasion (2007). In fact, I like to think that many facets of this story have become a part of popular culture, including the replication “pods” and Donald Sutherland’s scream in the 1978 film version. While the source material is inherently pulpy, a result of the genre and the era in which it was published, there is an entertaining quality to the story that has allowed it to survive for so long.

Simple in its execution, but brilliant in its reveal, The Body Snatchers builds up an inherent distrust of the people surrounding the main characters as they investigate why everyone seems “off” in this small, California town. While the full explanation of the aliens’ presence and purpose is relegated to an enormous information dump more than half-way through the book, it nevertheless contains some interesting ideas and concepts that could be plausible given the circumstances. I would have preferred better integration of this information into the plot, but sometimes the characters just need to sit down and explore these ideas in depth.

In the end, The Body Snatchers has plenty of strong moments in its plot. Sure, there’s the weaker section or two, and the more upbeat ending didn’t have much explanation other than the aliens’ annoyance of humanity’s persistence. Still, it’s a fun story, and even decades later it’s clear why The Body Snatchers is a timeless classic, even if it’s not “on par” with more significant literary titans. Maybe that’s its charm, though. By making it about the “everyman,” the horror and terror of everyone around them being replaced by emotionless beings is much more relatable on a visceral level.

A timeless pulp classic, I give The Body Snatchers 4.0 stars out of 5.