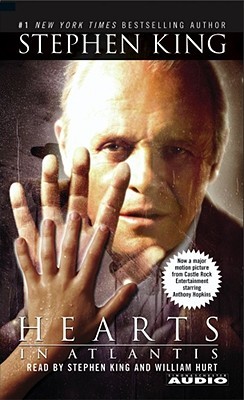 When I started Hearts in Atlantis, all I knew about it was that it was written by Stephen King and there was a movie of the same name that was likely based on it. As I began to read, I found myself enthralled by the coming-of-age story that presented itself. I had no idea it connected to the Dark Tower series, but that detail was almost ancillary, a neat little connection into a bigger picture. Having made it half-way through the book, I wanted to follow the main character’s development into adulthood but, then the story suddenly stopped.

Instead of following a story that had engaged me, the focus shifted to a completely different character, only loosely tied to the events in the first half of the book via one of the characters, who was now in college. Almost in a fractal fashion, this story was half as long as the first, with each successive story growing shorter and shorter, while still being connected to the first narrative in some way, no matter how loose that connection might have been. Finally, the story returns to the main character of the first section, but only stays long enough to say goodbye.

I absolutely loved the first story in this “collection,” and by its strength alone, I would recommend this to anyone. However, the second half of the book felt too disjointed to be interesting, especially with all the emotional energy I had invested in the first story. Sure, they were somewhat interesting in their own ways, showing the relentless march of time toward the modern era, but they simply lacked that fantastical little spark from the first story (incidentally, the same spark that was connected to the Dark Tower series).

A great story with almost unnecessary add-ons, I give Hearts in Atlantis 3.5 stars out of 5.