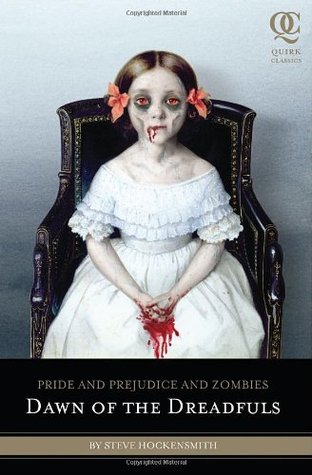 As I’ve mentioned before in my review of Pride and Prejudice and Zombies, I understand the concept of combining this classic piece of romantic literature with its complete obverse; it just felt like it was almost held back from its full potential by adhering to (most of) the original manuscript. With the prequel to this book, Dawn of the Dreadfuls manages to examine the ridiculous nature of this mashup in a way that’s so tongue-in-cheek that the tongue has practically ruptured the cheek entirely. That is, this prequel doesn’t take itself nearly as seriously as the original Jane Austen adaptation did.

Even if the non-Pride and Prejudice and Zombies characters were mostly cartoonish in their representation of stereotypes and tropes, they were fun to read as they provided a delightful offset to the canonical characters of the Bennet family. Also, instead of trying to find some boring section of text wherein to insert some zombie excitement, Dawn of the Dreadfuls provides equal parts action and society to accommodate a balance that highlighted the extreme disparity between the two. In fact, when the two finally meet, it’s during the exciting climax of the story. Of course, knowing this is a prequel means there has to be some way out of the predicament; otherwise the original Pride and Prejudice and Zombies book cannot take place.

Despite all the things it has going for it, Dawn of the Dreadfuls suffers from a plot that seems to drag along like the un-functioning foot of a zombie. Sure, each plot point has its purpose, but they almost seem to belabor the point. There were a few chapters where I felt the plot to be somewhat repetitive if it weren’t for a slightly different outcome to show character growth. In any case, I’d still prefer this book over Pride and Prejudice and Zombies.

A prequel that could fully explore a ridiculous combination, I give Dawn of the Dreadfuls 3.5 stars out of 5.