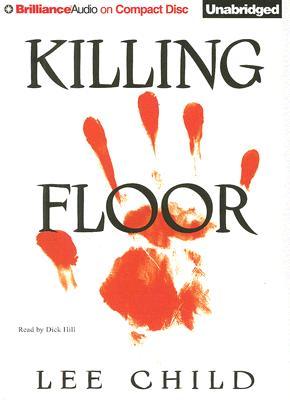 The first book in the Jack Reacher series is certainly a thriller, through-and-through. I certainly can understand its appeal, especially for male readers, since it has plenty of violence and sex while also exhibiting a number of action sequences. Consequently, it felt somewhat “pulpy” in that it was entertainment for entertainment’s sake. Sure, it’s a fun thrill-ride, but certain elements didn’t invest me in the characters. Jack Reacher himself is probably the majority of this issue, as he’s a drifter with little-to-no connections to anything or anyone, merely acting as a conduit to make action/killing happen.

As for the core mystery of The Killing Floor, it was a fascinating premise and had a slow unraveling to keep me intrigued along the way. This was undoubtedly the strength of the book since it was a unique and intriguing twist on a pretty common crime. With a small cast of characters, the plot stayed pretty focused, even if there seemed to be an unusual amount of coincidence that got it there. Even the characters themselves mentioned how coincidental it was, which merely made the fact of these coincidences more obvious. This detracted from my suspension of disbelief.

For the first book in a series, The Killing Floor does its due diligence of hitting all the tropes of the thriller genre and establishing Jack Reacher as a character who could do anything and be anywhere. I’m sure the other installments in the series took advantage of this flexibility, even if I haven’t read them yet. What was somewhat troubling was how the deaths of the people in the book felt real and had real implications and consequences, but Jack Reacher wasn’t affected by much of it at all. If anything, this book establishes Reacher as a sociopath or at least someone who exhibits many traits of one.

A book filled with everything that would appeal to “guys,” I give The Killing Floor 3.5 stars out of 5.